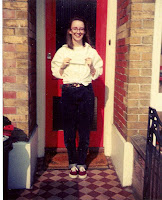 I've said before that I don't normally make political statements, especially since it's sometimes got me into trouble, but the current climate is worrying me a lot.

Thursday was polling day. We always vote. I feel very strongly that many thousands died so that I could participate in a democracy, and I don't intend to let them down. But this time round, for the first time, I felt I could understand the people who said they had decided not to vote, not because they were apathetic but because they couldn't see any difference between the parties. They are all as bad as each other, they said. Pat and I went off to vote after a great deal of thought, and a complete nightmare trying to find our polling cards ( that's another story which will make another blog post on its own!). I stood there in the voting booth and looked at the acres-long ballot paper, and thought, 'hell, what do I do?'

Let me tell you that I am a dyed-in-the-wool Labour voter. I voted for Neil Kinnock's Labour in 1992, absolutely certain that we would get in. I even had my photo taken with my polling card on the doorstep as I went out to vote (above), utterly certain that my world was going to change. The disappointment was bitter.


For local elections I vote Liberal, simply because I think they are the best party at local level. They listen to local people and they have moral integrity. I would vote for them in a national election if they had any chance of getting in, but with our crap, first-past-the-post system, they haven't a chance of making a difference, especially since I always seem to have lived in staunch Tory areas.

I voted for Tony Blair, even though I though I had concerns about some of his policies, but I figured at least he had a heart. I still think that he did what he really believed in, what he thought was best for the country, despite the Iraq war.

But now we are facing a new Tory government. I remember what it was like the last time round. I remember the heartlessness of Mrs Thatcher, the sheer cruelty of her regime. I remember the horrors of the miners strike, and the misery her years in power left carved in the hearts of many British citizens. It has taken a long time to exorcise those ghosts, and frankly many still remain. While I agree that the Unions needed reining in, and I didn't agree with Arthur Scargill one bit, she still created a society of callousness, and I dread its return. The thought of Cameron, no matter how 'caring' he pretends to be, getting in, is a horror to me.

I remember the day Maggie Thatcher was elected, how I sat at my desk at school and wept. Somehow, even at 9 years old, I sensed what was coming. All I can do now is hope that the dark shadow of fear creeping up on me each time I watch another Gordon Brown disaster on the news is just an old reflex, and not a harbinger of divisions and and heartlessness to come....
Posted by Bex Barrow at 16:11