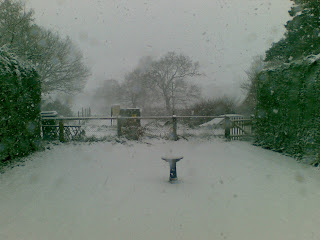 Before..... (okay, its in the snow, but you get the picture, there was nothing here.)

Having spent an embarassingly large amount of money in the garden centre on Wednesday, planting up is now well under way, in spite of the weather. Its beginning to look like a real garden. All salutations to Pat, who has done all the backbreaking work! 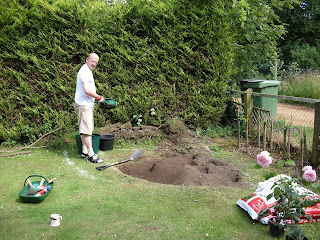 And we have the photos to prove it! He showed great dedication is sifting out stones, which he estimated was about 15 trugs full! 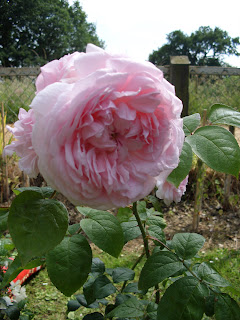 The roses we have bought are going to be excellent. They are all old roses, and include 'Winchester Cathedral', which is the white one we had at our old house (a salute to the sight of my graduation), and 'Geoff Hamilton', a variety I've wanted for a long time because of its fabulous pink ruffled blooms and glorious scent. This one is called 'Eglantine', I think.

It all looks a bit spindly at the moment, but when it gets established I will probably find I have planted everything too close together. 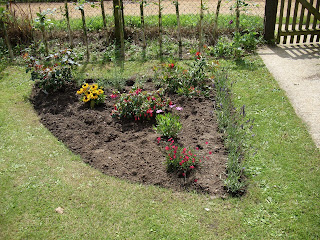 This is the border with the lavender hedge. The bottlebrush tree in the corner is having a second flush of flowers, and we managed to find a bush fuschia that is smothered in blooms. When I had finished putting everything in, the whole bed was teeming with bees and hover flies! 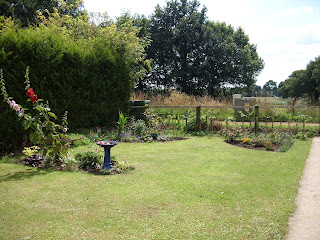 As you can see, its starting to get there. Next year, when the Philadephus, Weigelia and Sambuca Niger start thickening up to form a screen at the back corner, it will really start to look nice. Lets just hope the whole scheme is 'peacock-proof'!

It so nice to have a garden to potter about in, in the evenings. I feel much more at home as a result. It's amazing the sense of wellbeing I get from gardening, even if its only deadheading and watering. Such bliss in the twilight. We still have to get to grips with the section under the windows of the house, which will need digging over several times because it is so full of ground elder and nettles, but we'll get there. I already have ideas for planting there too - a lacy hydrangea perhaps, and definitely a red japanese quince, which flowers in winter and always reminds me that spring will eventually come! Pat wants to cultivate echinacea there. And of course, lots more hollyhocks! 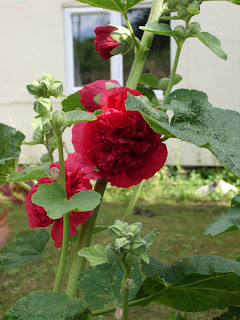