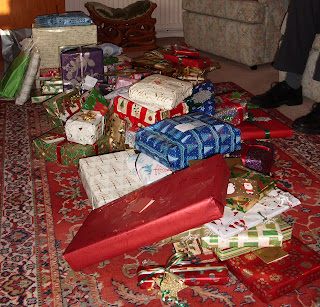 (I promise this is presents for seven people, although it looks like enough for about three hundred.  Obscene, isn't it?

Why do we do it? Oh, and those are cousin Nigel's feet there, in case you were wondering...)

We are home again after our annual Christmas Odyssey.  The annual present mountain has been ploughed through.  The Biggest Gut Competition has been won.  I took down the Christmas tree today, and wrapped the baubles in tissue, carefully clipped the lights back into their tidy for another year.  And while I did it, I thought of my grandfather, who used to sit back in his carver chair after he had eaten his Christmas lunch and say the same thing every year:


We were away for nearly a fortnight, and I feel rather disconnected now.  I've come back with my usual 'post-visiting other people's houses' tidying bug.   I am full of ideas for throwing STUFF* away, irritated by the fact that in this house there is not a horizontal surface that isn't covered with STUFF*.  I have lots of plans of how I am going to get organised which, like most resolutions, stand as much chance as a cat in hell.

Oh well.  Its all over.  All that mad rush.  Now to decide what to do with the next eleven months, before it all starts again....

*STUFF. you know, stuff.   Those odds and ends that never get put away or cleaned up, you know the things.  Bits of post.  Necklaces.  Dead batteries.  Bits of ribbon.  Odd photographs separated from their folders.  Nail scissors.  Pegs.  Books.  Gloves.  Scraps of paper.  Useful cardboard tubes that are being saved for something that will never be made. Hand cream.  Newspaper crosswords.  Dust bunnies.  And lots and lots of pens, for some reason...
Posted by Bex Barrow at 20:37